HP have unveiled a brand new All-in-One Graphics Workstation, set to rival the Apple iMac 27″. Many creative professionals seeking a very fast all –in 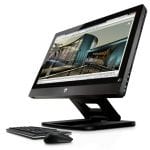 –one PC have been using the i7-3.4GHz  iMac and installing Windows 7. Until now there is has been no serious PC alternative …… The HP Z1 is the world first PC All-in-One Graphics Workstation. AND, it is available on flexible lease with HardSoft Computers.
You know the deal with HP workstations such as the Z201 or Z800; they are generally highly powered machines but come in a big, dark, grey and boring chassis. The HP Z1 is the complete opposite; an All-in-One machine that has a 27” LED-backlit IPS display. Such a high quality display is down to the fact that the Z1 comes with NVIDIA Quadro 4000 Graphics- which is far superior  than either the iMac or Mac Pro offers as standard..
Inside the HP Z1 packs next generation E3 and E5 Intel Xeon processors, a Solid State Drive, up to 32GB RAM, Blu-Ray and more such as a height adjustable stand. Unlike any other all-in-one computer ,a tool less flexible chassis  allows you to snap the machine open without using any tools whatsoever. The end user can now add a second hard drive, upgrade the memory or access the graphics card by simply a few simple steps! 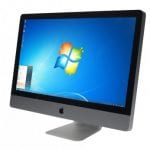 It’s not cheap though but given a Quadro 4000 graphics card is £500 to buy anyway then the overall spec offers good value for money. It is expected early April with an estimated lease cost of £16 per week plus VAT over 3 years, including on site warranty.  As an idea the Apple 27” iMac with i7-3.4GHz, 16Gb Ram , AMD 6970M graphics running Windows 7 is  £18 per week on a three year lease.
As a HP Preferred Partner, HardSoft Computers can offer all the HP Graphics Workstations from the entry level Z201 to the Dual CPU Z800. All available to lease and hire. Please contact a member of our sales team for more information on 01279 718 693 or email sales@hardsoft.co.uk.