Home Blog Versus Air vs Pro: Battle of the Macbooks

As the Macbook Pro becomes a slim lightweight machine and the Macbook Air becomes more powerful, trying to decide between the two just gets harder for Apple users. In the past, simply put the Macbook Pro was a better machine, full features, a powerful processor and its robust frame gave it the edge over the Air, commonly viewed as being beautifully designed but over priced and under performing. The last year has seen a significant change in the similarity of these two machines and they are closer than ever before in terms of price and performance. Coming into 2012 it looked like there was only one 13″ Macbook that was worth buying, however now that the Pro and Air are the same price; and the Air’s performance has increased the choice isn’t so Black and White anymore. Opting  for the Flexible Finance Lease through HardSoft; both Air and Pro start at just £8.95 + VAT per week on a three year lease. ! For some the choice will be obvious as the trade off between extra HDD space in the MacBook Pro and the portability of the Air will be a no brainer in favour of a larger HDD however aspects such as weight and faster boot time can affect peoples decisions. Its a tough choice, hopefully this blog will help you make an informed decision and not make your decision even harder! 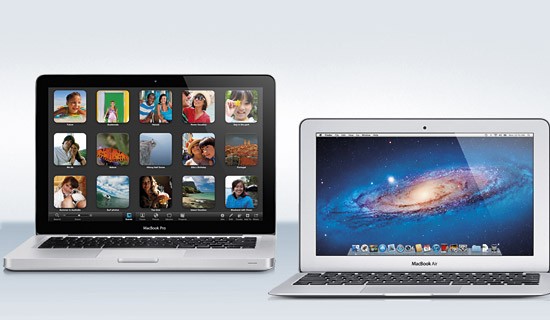 Size and weight
Right off the bat the obvious winner here is there Air, weighing only 2.96 pounds compared the the Pro weighing 4.5 pounds. However the difference of 2 pounds when carry the Pro in a carry bag or case is minimal so don’t be put off by the extra poundage on the Pro.
Verdict: Air is the clear winner! 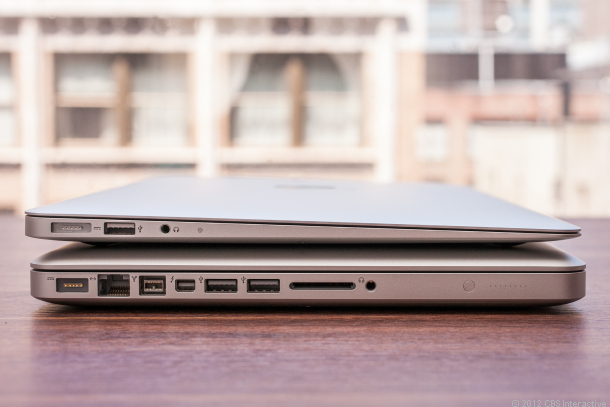 Screen
Both the Air and Pro like all Apple products have very sharp screens. The Air has for many years had a higher resolution screen than the Pro. In comparison there aren’t too many differences however the Pro exhibits more glare than the Air from different angles. If the Retina display were to appear on the 13″ Pro i would say that the Pro has the better screen however it hasn’t yet so i can’t!
Verdict: Air wins!
Touchpad/Keyboard
The Air and Pro share the same Touchpad and backlit Keyboard. Very hard to single out any major differences apart from the Pro’s key are a little bit taller. However both the keyboards perform their jobs perfectly.
Verdict: Tie, both are excellent
Performance
The basic £999 model of both machines perform very closely, the Air has a faster boot time however the Pro is slightly (and i mean slightly) faster when it comes to general use. Obviously the higher end Macbook Pro 15″ performs well above both however the price may put some people off.
Verdict: Tie, trade off between Faster Boot or Slightly faster general Usage
Ports and Extras
As seen in the image above the Macbook has more ports than the Air: An extra FireWire 800 port and a dedicated Ethernet port, plus a slot-loading DVD drive. Although the absence of a DVD drive may seem like a deciding factor, the age of using CD’s is slowly dying and if needs be you can use a USB to DVD burner which can connect up to the Air.
Verdict: Pro is winner, has more built in features.
Storage
Lets start with the Air, with 128GB included in the basic £8.95 lease price, you have enough space to use it day to day however if you like to store music and photo albums on your mac then the Air probably isn’t for you. There is the option of upgrading the HDD now to a 512GB SSD however the price will significantly increase.
The Pro has a 500GB HDD as standard with the entry model, although it operates slightly slower it has much more room for storage.
Verdict: Pro wins, purely due to the extra storage
Battery Life
Both machines have batteries that last around 7 Hours. Majorly depends on what you are using it for and when you charge it as both factors can affect short and long term battery life!
Verdict: Tie
Based on the comparisons above it is a tough choice. The Macbook Pro offers more ports and larger storage than the Air however the Air is lighter, has a better screen and performs the same as the Pro. In the long term the Air looks like the better option as the design is futuristic and is less likely to look obsolete compared with new designs. The Pro doesn’t have enough about it to edge the design and usability of the Air, therefore the Air looks like the better option!
HardSoft are an Authorise Apple Reseller and can offer the right Mac for your business on a three year finance lease for business users that include an Upgrade option after two years and three years warranty including parts and labour.For all lease offers on the 13″ Macbook Air and 13″ Macbook Pro contact Hardsoft on 0207 111 163 or email: sales@hardsoft.co.uk