When leasing a Server, our customers are usually aware that they need to state which Raid rating they require, thanks to an outside source like an IT consultant. They just do not know what it actually means. If you would like a VERY simple explaination, read on…
RAID is an acronym for Redundant Array of Independent (previously inexpensive) Disks and refers to the practice of storing the same data on multiple disks, therefore a number remain redundant (ie not used). The reason for this is reliability, availability, performance and capacity. The level of RAID you need depends on your need for each factor in conjunction with each other !
Your Server appears on your PC or Mac as a single drive letter (a logical drive) but is, in fact a number of disks working in unison. The physical drives are active collectively which reduces the time taken to transfer data, this is especially useful for multiple users. Fail tolerance is also negated depending on which RAID level you employ. Anything higher than RAID value 0 will hold a back up copy of all data, ensuring your data is protected in the instance of hardware failure. This does not protect against theft or malware so backups still need to be made.
Here is a run down of the RAID values, helping you to make an informed decision… 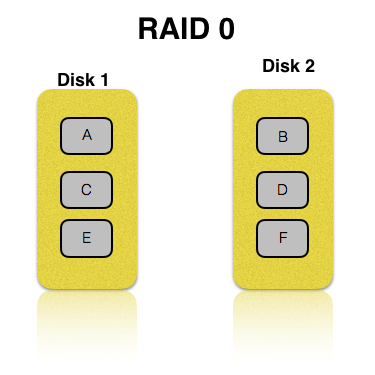 RAID LEVEL 0 – Used solely to improve the performance of the Server, RAID 0 uses a system called ‘stripping’ which spreads Blocks of each file across the multiple disks. Using at least two disks, the computer performs faster, because of the multiple drives reading and writing data. This level DOES NOT protect against hard drive failure as it does not hold any equivalent (parity) data. RAID 0 is only used to increase the performance of the disk. This system provides the fastest write performance and is the cheapest.
RAID LEVEL 1– 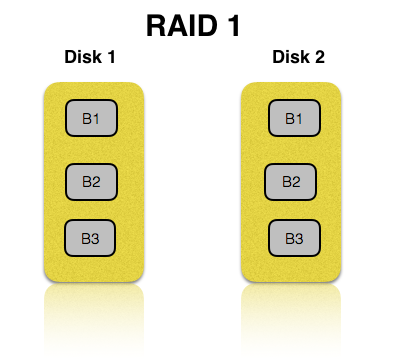 Also referred to as disk mirroring, this system utilises at least two disks creating a mirror of one on the other and therefore provides ‘fault tolerance’. It comes at a relatively low cost but does cut your data storage in half, as it saves everything twice. Also, unfortunately, this can lead to a slight drag in performance but it does have twice the read rate as a single disk as it can be read from either disk.
RAID LEVEL 2– Error-correcting. This level is very rarely used, it is expensive as it copies the data at the bit level. The system requires 10 disks to start up and the performance is not greatly improved. The disks are arranged in the stripping formation but at the bit level, not the block level. It also has the added extra of error checking and correction information stored.
RAID LEVEL 3– This is also configured using stripping, one of the disks is also dedicated to parity. It is also rarely used as it cannot activate more than one request so is also slow. It is only relevant for systems which have one user.
RAID LEVEL 4– Utilising block level stripping, like RAID 0, RAID 4 also has a parity drive so has fail tolerance. It is no longer used as the parity drive means that the input/ output of the dives cannot be overlapped and are sluggish. 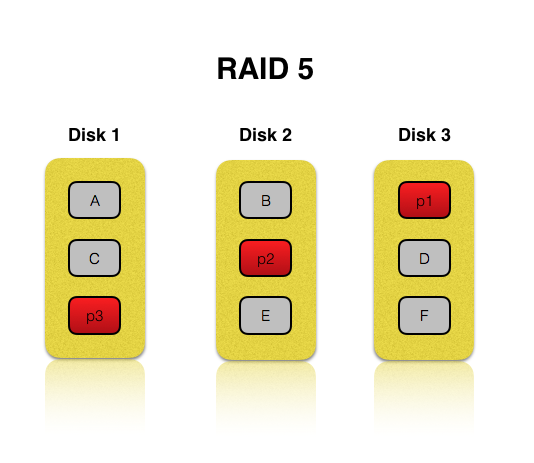 RAID LEVEL 5– This is a more commonly used method as it is fast and protects against fault tolerance. Utilising Block level stripping and parity this configuration also provides error correction information. There are a minimum of 3 disks used and provides a cost effective resolution to good performance and redundancy.
RAID LEVEL 6– This utilises the same Block stripping and parity as RAID 5 but also has another parity backup. This means that the data would not be lost and could continue to work, even if a second disk were to fail. It is significantly more costly than the popular RAID LEVEL 5 so not very common but if you need the highest level of fault tolerance this is the one for you. 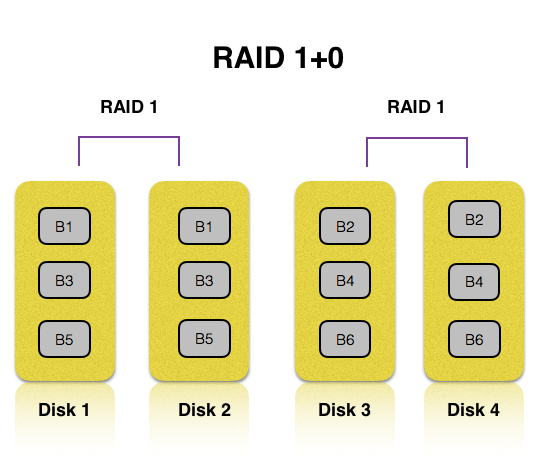 RAID LEVEL 10– Also referred to as RAID 0 + 1, this configuration of mirrors with overlaying strips. This provides much greater performance and fail tolerance but at a high cost. This mode uses at least 4 drives and has 50% of redundancy but it is speedy. If your needs are performance related, if you can afford it, this is the one for you.
Alternatively, RAID 0+1 utilises stripping and then mirrors it. It is used for sharing data as well as duplicating it among disks.
RAID 5+0 or 50– This is a RAID 0 striping system with the parity distribution in RAID 5. The smallest system contains six disks so therefore is costly but has superior performance. This is only needed for very large amounts of data.
HOT SPARE– Some RAID systems can be purchased with an additional HOT SPARE disk. This allows for replacement of a failed disk automatically. It literally just kicks in when needed though you need to still at your leisure
Most small/ Medium sized businesses employ a RAID 0, 1, 5 or 10 system. It is important to point out that it does not replace backing up which still needs to be completed regularly ! You could have a RAID system which automatically backed up but this needs to be implemented and maintained. The other issue to mention is that if a Drive fails it needs replacing !. Often the relief that follows a failure that has meant zero inconvenience leads to complacency. Losing a second drive in RAID 5 is a disaster. Most Servers are stuck out of the way and a weekly glance to check all the drives are blinking green rather than red will offer you some comfort. HP does have diagnostic tools that will email you when there’s an issue but we have seen these often ignored by users.

Costs though need to added into these factors. Its great having the ultimate RAID that meets you needs in terms of redundancy, reliability and speed but if the costs are prohibitive then it all becomes a wasted task. At HardSoft we lease Servers and mainly from HP as the range and choices are easier to understand. Essentially after choosing your level of RAID in order to get a price we would need to know how much storage you need and whether you want a RACK or TOWER Server. The very cheapest Servers such as the tower HP Proliant ML110 have a limited choice of hard drives and will struggle beyond RAID 1. Stepping up to the HP ML150 then this Server has a choice of faster Storage Controllers and a choice of faster and larger drives with capacity up to 8 drives wherther convenoent Hot Swap or cheaper Cold Swap drives.  A HP Proliant ML150 with 2 X 1GB  drives under RAID 1 starts at £9.95 per week on a three year lease. Making that RAID 5 adds just 65 pence for that extra peace of mind. Then if you want faster access with SAS drives (rather than SATA) with Hot Swap (rather than Cold swap) then you will jump to a total of £16.90 per week plus VAT on a 3 year lease Leasing includes three years warranty and HardSoft offer installation and further support options.