The new 2013 Apple iMac comes in four standard configurations, two 21.5-inch models and two with 27-inch screens. As with most Macs, these new iMacs can be configured to order (CTO) at the time of purchase with a variety of 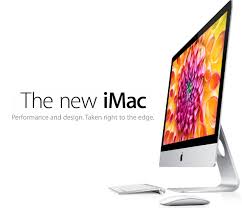 storage, processor, graphics and RAM options. HardSoft have all configuration iMacs available on a flexible business lease; and offer all of the Apple Store upgrades as well- promising higher performance for those willing to pay the price.
Leasing makes the higher spec CTO models more affordable and with the current iMacs being nearly 15% more expensive than this time last year then financing a high end Mac makes sense. For example, our ‘CTO’ 27-inch iMac takes the high-end configuration and upgrades the processor from a 3.4GHz quad-core Core i5 processor to a 3.5GHz quad-core Core i7 processor, which adds £1.65 per week. The memory stays at 8GB, though 16GB and 32GB upgrades are available. All of our 27” iMacs ship with 16GB RAM as standard, however, this can be upgraded to 32GB for just £1.45 a week. The ultimate iMac also upgrades the standard 1TB, 7200-rpm hard drive to a 3TB Fusion Drive at an extra £2.65 per week. Finally, the new iMac has the option to upgrade the graphics card as well, an NVIDIA GeForce GTX780M with 4GB of video memory (over the standard GTX 775M with 2GB of RAM) adds £1.25 to the weekly lease cost of the 27” iMac. Given the hefty costs of the i7-3.5GHz iMac then HardSoft include a three year warranty that also provides a loan Mac should yours ever fail.
The new CTO iMac is reportedly 6 percent faster, overall, than last year’s custom iMac, a 27-inch model with a 3.4GHz quad-core Core i7 processor, 1TB Fusion Drive, 8GB RAM, and Nvidia GeForce GT 680MX graphics with 2GB of video memory. The new custom iMac was 48 percent faster than last year’s top of the line iMac and 57 percent faster than the new entry-level 21.5-inch iMac !
Much of the performance differences we see when comparing the new CTO iMac to the old standard configuration models are due to optional fast Fusion Drive. Fusion Drive mixes a speedy 128GB flash storage drive to a standard hard drive, giving Fusion Drive the high capacity of a hard drive, but the performance of an SSD. Copying 6GB of files from one spot on the drive to another took nearly two and a half minutes on last year’s high-end iMac with 1TB 7200 rpm drive. The new iMac i7 with a 3TB Fusion drive takes just 35 seconds to complete. The flash storage on the new CTO iMac is connected via PCIe, which Apple says can deliver up to 50 percent faster performance than the previous iMac and is now available as 1 1TB unit at the same price as the old 768GB..

Interestingly, the new i7 CTO iMac’s graphics frame rates are only 10 percent faster than the Iris Pro integrated graphics found in the entry-level 21.5” iMac, The 21.5” iMac starts at £9.80 + VAT per week on lease from HardSoft which includes three years warranty and options on insurance.
Also interesting are Macworlds Portal 2 test results. In their standard Speedmark Portal 2 test, the new CTO 27-inch iMac had 11 percent higher frame rates than last year’s custom iMac. The new CTO was also 23 percent higher than last year’s high-end standard configuration iMac and 36 percent higher frame rates than the current low-end 21.5-inch iMac. Cranking up Portal 2’s quality settings and resolution to 2650 by 1440, they saw frame rates on both the newer and older CTO iMacs drop. The new model’s frame rates dropped further, though, allowing last year’s custom iMac to post about 6 percent higher frames per second.
The magazine ‘Macworld’ also ran a graphics benchmarks on the new 2013 iMacs and found that at 1920 resolution, last year’s CTO iMac was 9 percent and 6 percent faster, respectively, than the new CTO model  ( ??? ), but between four and five times as fast as the 2013 21.5-inch entry-level iMac. At full screen resolution and higher quality settings, last year’s custom iMac again surpassed the new CTO iMac by a frame or two per second.
Confused ? In terms of CPU performance, the new Haswell quad-core 3.5GHz i7 was about 8 percent faster than the 3.4GHz Ivy Bridge quad-core i7 from last year’s custom iMac, 30 per cent faster than last year’s high-end iMac, and 35 percent faster than the new 21.5-inch iMac.
All new 21.5” and 27” Apple iMacs (both standard and CTO models) are available on a flexible lease through HardSoft. For more information or a quote please contact us on 020 7111 1643 or email sales@hardsoft.co.uk. And if you need more speed then think about the new Apple Mac Pro that we are looking to ship in November 2013 and already have orders for !