In recent weeks, Apple announced slight revisions to the new Apple MacBook Air. Processor upgrades were key to the new MacBook Air with Apple taking both 11” and 13” models up to the latest 4th Generation processors. The MacBook Air now also 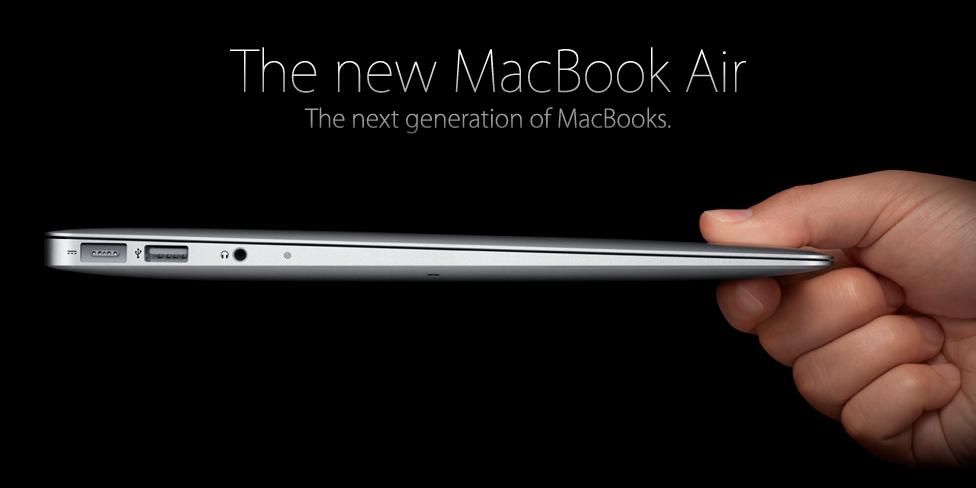 has up to 12 hour battery life AND most importantly of all, the price has reduced by £100. This price reduction has mixed up the choice between Air and iPad Air as the price difference is now hard to jutify.
The history of the Apple MacBook Air is that it has always been a thin and lightweight alternative to the MacBook Pro and aimed at customer who are on the move a lot but still require a good spec machine to work on whilst out of the office on trains and planes etc. Starting at just 1.08kg and incredibly thin at 1.7cm, the MacBook Air certainly fulfils its purpose. Also, running of flash storage the MacBook Air response time is amazing along with the wake up time. Flash storage is roughly 9 time faster than a standard 5400rpm SATA hard drive. Finally, the MacBook Air (along with every new Mac) comes with iPhoto, GarageBand, iMovie, Pages, Keynote and Numbers as standard. So you are ready to go as soon as you take the Mac out of the box. HardSoft, of course, offer the MacBook Air on our unique Flexi-Lease with the 11” starting at just £6.70 + VAT per week and the 13” increasing slightly to £7.55 + VAT per week. Leasing includes three years warranty as well. Both prices are for the base spec on both machines, however, popular upgrades are:

With the new Airs model reduced then pricing is very close to Apple iPad Air – the 11” MacBook Air starts at £6.70 + VAT per week on a HardSoft flexible business lease. £6.70 + VAT per week is almost the EXACT same cost as an Apple iPad Air 64GB Wifi + Cellular. Therefore, if you’re after a cheap Apple device that you need for working on whilst out of the office, the iPad may now NOT be the only answer. Having has conversations with several clients, most would prefer working on an 11” MacBook Air over an iPad as it is a “proper computer” rather than a tablet running Mavericks OS  rather than IOS. You can store data and could run Adobe CS6 or Microsoft Office 2011 without bothering with the cut down App versions. Battery life between the Air and iPad Air are almost identical as well.  The only downside to the MacBook Air is that it does not have the 4G Cellular function as an option that the iPad Air has. However, this may not be essential and you could always plug in a USB dongle with  4G .
We have certainly seen an increase in popularity in the MacBook Air 11” in recent weeks, and we believe that it is due to the fact that people are now treating it as an iPad alternative.  It has gone from our fifth most popular Mac to THE most popular Mac since the price has been reduced.
So, if you travel a lot, are away at meetings a lot, or lucky enough to be away on holiday/business a lot and are looking for a low end portable device, consider the MacBook Air on a flexible business lease . For more information, contact us on 020 7111 1643 or email sales@hardsoft.co.uk