So this week we have had the normal rumour mongering, fanfare and hysteria that often precedes Apple’s WWDC conference. However for Mac hardware fans the WWDC didn’t offer up much as was expected or hope. There were two hardware updates though, the announcement of a very impressive new small Mac Pro with a less impressive “available later this year” tag; and an update to the Apple Macbook Air.
Since its initial release in 2008 the Air has carved out its own followers and own place within Apple’s product line, some may say by killing the 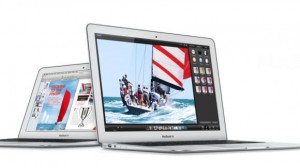 original white Macbook but that’s neither here nor there. And now we have a new refresh; the Mid 2013 as it will become known, but what do you get over the Mid 2012 ?
Updated Processors – To the untrained eye the new processor  may seem slower, with the entry level being an i5 1.3 GHz rather than an i5 1.7GHz; but these are Intel’s 4th generation processors, or the Intel  Haswell processors to their friends. Intel have worked hard on improving the battery life rather than speed performance which means that the new Airs will run for 9 hours for the 11” and 12 hours for the 13” compared to 5 and 7 hours respectively. A 12 hour battery without compromising on speed is a pretty impressive feat. The reason the 13” has more battery life as the bigger chassis can accommodate more batteries within.
Cheaper storage – The 11” Macbook Air now comes as standard with 128GB flash storage, as opposed to the Mid 2012’s 64GB flash storage. With this model still being the same price on a HardSoft flexible business lease as the previous generation, that’s double the amount of storage for not a bean more! Both models will have 128, 256 and 512GB options and with the 13” base model being slightly cheaper it means that having an Air with bigger storage is cheaper than ever before, especially combined with free Microsoft Office  2011 with all Macs leased from Hardsoft this month.
Faster – The MacBook Air uses the Intel integrated graphics solution. With the advent of the Haswell chipset comes the new Intel HD 5000 replacing the impressive HD 4000. Apple claim that these graphics are 40 per cent

faster than its predecessor.  When combined with the fact that Apple are using faster  flash storage (well it’s the same stuff but attached internally direct to the motherboard) which is 45 per cent faster than the previous MacBook Air. HardSoft used to offer storage upgrades for the Air from OWC but these are now slower. This Mac should fly along through images and web pages.
Pricing  –Pricing has changed and the entry level 13-inch Air is now cheaper and £8.45 per week on a HardSoft business lease. The 11″ retains the same price it gets bigger 128GB Flash Storage which means just £7.45 per week including three years warranty and support to lease . Basically for a £1 a week you can jump from 11″ to 13″ !
This is also the first model in the Apple range to include the new wireless standard 802.11ac which allows for faster data transfer and a longer Wifi range- with fewer dead spots. To benefit you’ll probably need a new Wi fi router, but don’t worry Apple have thought of that with a reboot on both the Apple Extreme and Apple Time Capsule (available . These new 802.11ac devices are both available straight away and can be included in one of our flexible leasing packages. In future this standard should be faster than traditional cabling.
Want to know more either about how to finance a new Apple Mac for a new start up or established business or want details on the specs then give us a call, We are Apple Authorised as well.