The Samsung Series 9 is the future of Windows computing maybe ?  A true rival to the Apple MacBook Air, the Samsung 900X3A is bound to be a hit. Boasting a gorgeous design and fantastic performance courtesy of its  Core i5 processor. The 13.3” LED display is bright, clear and features 1366×769 resolution. With 4GB RAM, a 128GB SSD Drive its £11.50 per week on a three year business lease from HardSoft.  The Samsung Series 9 will certainly shake up the portable market which Apple, until now, have had relative monopoly on. 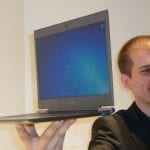 Another Ultra Light is the Toshiba Z830 made from strong magnesium alloy and weighs just 1.1kgs and is only 8.3mm thin. Its as good as the Samsung in all respects but speed but that means its cheaper with an i3 Z830 version starting at £8.30 per week on a three year lease including three years warranty and our normal upgrade options.
So… how does the lease work? After 24 months you can RETURN the equipment and cancel the agreement. You can also RENEW the agreement whereby we will contact you and offer you the equivalent computer, at a similar cost per month. You can RETAIN the equipment at the expiry of the lease for a one off fee of £1 to pay. Please contact us for latest Flexi-Lease offers. Authorised Resellers of Apple, Samsung, HP, Toshiba, Sony and many more, HardSoft Computers should be your next port of call for your IT requirements.