No you don’t have to wait until April for delivery. The new Mac Pro is available and ready for shipping from HardSoft – right here, right now. In fact we’ve already delivered a considerable number of six-core and 12-core units 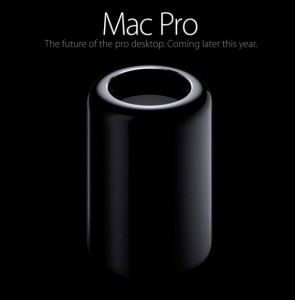 and early feedback is positive, suggesting it is everything that Apple claims it to be – built for creativity on an epic scale.
The new Apple Mac Pro is available on a flexible lease through HardSoft and starts at £21.60 + VAT per week over 3 years.
When asked about the speed, all customers having recently taken delivery of the Mac Pro rated it with top marks, backed up with comments like extremely fast – no lag whatsoever – boots and loads programs almost instantaneously.
And that’s because… The new Mac Pro is all muscle, starting with the new generation Intel Xeon E5 – available with 4, 6, 8 or 12 cores of processing power on a single die. And up to 30MB of L3 cache, 40GB’s of PCI Express gen 3 bandwidth and 256- bit- wide floating-point instructions. It’s fast – up to two times faster than its predecessor. With next generation PCle-based flash controller technology, the new Mac Pro will deliver the fastest solid-state drives available as standard in a desktop computer. This will give you up to 1TB of storage so that booting up, launching apps and opening massive files is instant – quick as a flash. Each and every component in the new Mac Pro is optimised for performance, including a four channel DDR3 memory controller running at 1866MHz. It will support up to 64GB of memory and give up to 60GB’s of memory bandwidth. In simple terms – even the most computer intensive tasks can be completed in next to no time.

When prompted to comment on what they found particularly pleasing about the new Mac Pro, at least 75% of or customers remarked on how amazingly quiet it is.
And that’s because… The fan system required to cool such a high performance machine is made up of a single large fan that pulls air up through a bottom intake. Air passes vertically through the device centre, absorbing heat and carrying it out of the top. It’s so simple, extremely elegant and astonishingly quiet.
Our Mac Pro customer survey revealed that the design/look of the machine proved to be overwhelmingly loved and seen as something completely different from anything else on the market
And that’s because…The new Mac Pro looks unlike and is unlike any other computer. A complete rethink of its internal architecture has given the opportunity to radically rethink the entire enclosure, resulting in a much leaner, lighter, quieter and more streamlined structure. Unique, beautiful and just 25.1 cm tall with a diameter of only 16.7 cm, it is a pro desktop computer that looks great on the desk top.
With Mac Pro you’ll be more than ready for the next generation of high performance peripherals. You can connect massive amounts of storage, add a PCI expansion chassis and work with the latest external displays, including 4K desktop displays and peripheral devices capable of broadcast monitoring in 4K. Thunderbolt 2 port allows you to daisy chain up to six peripherals so you can plug in up to 36 external devices via Thunderbolt 2 alone.
Our customer feedback has shown almost unanimous ratings of ten out of ten; ten being extremely happy with the product. And overall delight at being supplied by us with the Mac Pro at an earlier stage than thought possible, given the April delivery quoted on the Apple website.

Many of our customers are from creative industries – the media, the arts, photographic – and the new Mac Pro is proving to be the ultimate tool/toy. The latest Mac Pro is an entirely new computer that is radically different from anything that has gone before. Every element involved – graphics, storage, expansion, processing power and memory – has been developed and engineered to be as future-proof as possible. And with workstation graphics including dual GPU’s, PCle-based flash storage, high performance Thunderbolt 2, new generation Xeon processors, ultra fast memory and support for 4K video, the new Mac Pro will deliver state of the art performance right across the board- just as our customers are telling us.
Remember, we are Apple Approved resellers and have the new Apple Mac Pro in stock here at Hardsoft, ready for immediate delivery on a flexible lease for business users. Leasing includes 3 years warranty from HardSoft as well.