Apple Mac vs PC. The choice is on… The debate that’s been going on forever is going to get even bigger with the imminent arrival of Microsoft’s Surface Studio to the UK on 15th May 2017.  And while these two all-in-ones may look very similar at first glance, there are in fact a fair few differences between them.
The 28″ Surface Studio is different to the iMac. It has an intuitive hinge on the back of the screen – an incredible feat of engineering that Microsoft have named the Zero Gravity Hinge – allowing for almost effortless repositioning from an upright panel to a nearly flat worktop. All the internals run from a small chrome box through the Zero Gravity Hinge, which you may think is just an unnecessary extra component compared to the iMac, but doing this has allowed Microsoft to produce an incredibly thin 12.5mm display.
When you look at the iMac 5K on the other hand, it has the clean and minimalist look you’d expect from Apple, with the internal workings built into its 27” retina display. The display is supported by a thin stand that allows you to make nominal adjustments to the angle of the display, but that’s about it.

Despite being thin in design, they both weigh in at 9.5KG. Although this doesn’t mean they can’t still be moved around without too much effort. Both also come with a wireless keyboard and mouse, and the Surface Studio also comes with a Surface Pen stylus to make use of the multi touch display.
It’s not easy to compare – although we’ve created a handy infographic to help you out – the software. Both will get you where you want to go, they will just arrive in different ways. However, Microsoft has put a huge focus on creators in the Surface Studio and with the Surface Dial. Creative professionals have been buying Macs for as long as we can remember and Microsoft has done an incredible job at giving them something new and exciting to own.

That said, Apple caters to users looking for high-resolution displays, with both 4K and a massive 5K available across the iMac range. The Surface Studio has True Scale technology built in and sRGB colours, while the iMac goes beyond sRGB and into a P3 colour spectrum with 25 percent more colours.
Most of the remaining hardware compares well, with similar processors, RAM and storage. The high-end 980M GPU in the Surface Studio will be a better pick than the Radeon mobile graphics in the iMac, but it’s also only available on the most expensive model.

Talking of price. Apple isn’t the most expensive technology merchant for once. This is in large part due to Microsoft’s 4500 x 3000 resolution, 28-inch touch display, which on its own makes up a hefty chunk of the asking price of the Surface Studio.
There is no UK finalised pricing as yet but doing some maths on US pricing on other Surface Products then I estimate the cost to lease a new Surface Studio with the highest spec (32GB Ram, 4Gb Geforce graphics) will be £ 25.90 plus VAT per week on a HardSoft Pure rental lease.  Interestingly the equivalent Apple 27” iMac to the same spec is more than 15% cheaper at £21.85 per week plus VAT to lease. I think the 15% premium is more than offset by the Touch facilities and design and creative possibilities that the Surface Studio offers.
The iMac is still lovely to look at and has some good hardware but Microsoft has pushed beyond that and created a unique PC product. The Surface Studio isn’t just an all-in-one PC. It is expensive, but it’s also unlike anything else on the market today, so the perfect solution is to lease one. Unfortunately it’s not available on the UK market as yet, but watch this space and we’ll keep you up to speed with its release date and pricing very soon. In fact, we’re working with Microsoft to bring you a sneak preview of the Surface Studio. If you’d like to come along to our event in Old Street on 19th April, and get the chance to have a play around with it, get in touch with us and we’ll send you all the details. 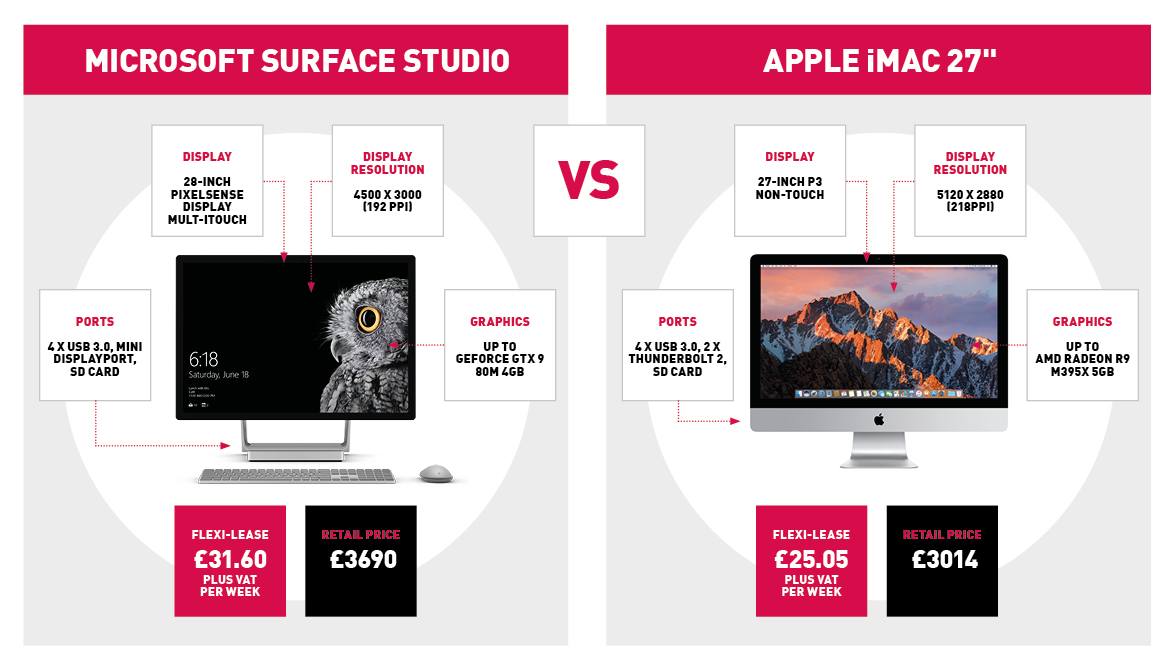