The New Apple iPad Pro 9.7-inch, whats new?
The iPad Pro 9.7-Inch is the newest addition to the Apple family! Smaller than the original 12.7-Inch iPad Pro, this latest iPad Pro is easier to handle- and perfect for those who are always on the move. As you’d expect the newbie on the block follows the same sleek exterior design as any Apple product, but taking a peek into the interior it’s definitely something new…
Essentially, its the successor the iPad Air 2 and is naturally faster but features the ability to use the Apple Pencil and write onto the screen as well as type with a the new Apple Smart keyboard.

There’s a new faster high-octane A9X processor that’s become a benchmark in the world of processors. The iPad Pro manages to outperform every other mobile device and even almost matches the performance of notebooks powered by Intel’s Core i3 and i5. That is a lot of power from a machine only 9.7 inches in size. This factor makes the iPad Pro great for media and images especially when combined with the device’s great graphics that best its rival- Microsoft Surface Pro 4. In addition, the 9.7-Inch iPad Pro includes better hardware compared to the similarly-sized iPad Air 2.
Along with the new processor comes the split screen function in which you can run two apps alongside each other at the same time. Perfect for researching and typing at the same time. Rather like a chameleon the device is adaptable to the user and its environment. There are 4 speakers placed in each corner of the iPad that adjust based on how the user is holding the device, this gives a better overall sound experience. An improvement from the older iPad Air 2 which only features two basic speakers at the bottom of the device.
Another adaptive function is the True Tone display in which the iPad sensors the lighting environment around you and adjusts the brightness to match, making the iPad Pro a more natural read that’s easier on the eyes.Other benefits include things such as 10 hours of battery life, a 12-megapixel iSight camera, a True Tone flash and 4K video support, all these improvement from the 2013 iPad Air 2.
The device comes in 4 stylish colours (silver, Gold, Space Grey and NOW Rose Gold)  is available in Wi-Fi or Cellular and has 3 different storage options starting at 32GB, 128GB and 256GB.
NEW ACCESSORIES 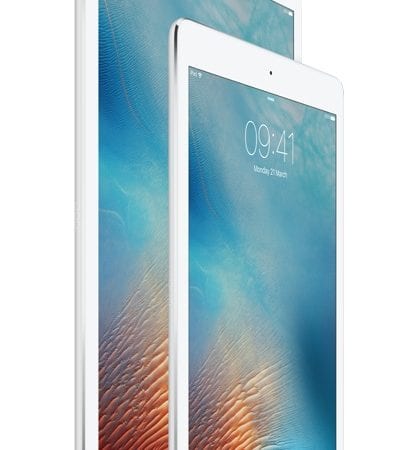 Smart Keyboard – Apple have introduced a new smart keyboard that attaches to the side of the device, it’s been coined smart as once you put the keyboard on the device you are instantly ready to type, no connecting or wires needed.
Apple Pen– The Apple pen is also a new accessory for the iPad Pro, a white stylus with a pressure sensitive rubber tip gives you the freedom to draw, sketch or simply make notes making the latest iPad even more user friendly and interactive.
Why Lease? Our iPad Pro leasing starts from the small amount of £4.80 per week (Wi-Fi only) with 3 years warranty .View our iPad Pro range here. At Hardsoft we can offer a 6% discount if 4 or more devices are ordered and can offer an MDM option for large scale roll outs.. If you’re interested in placing a large order why not give us a call on 0207 111 1643 or email sales@hardsoft.co.uk to see what custom offers we can do.